Where is the Use of Cannabis Legal in Europe? 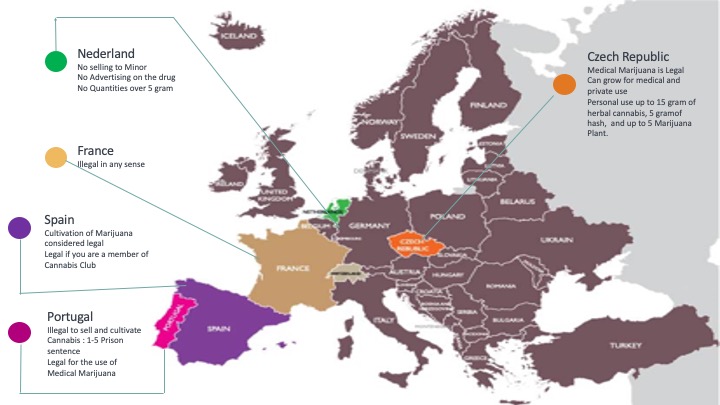 Cannabis is known by many for its medicinal properties as well as its health benefits, but many European countries still restrict or ban the use of the drug. The differing rules and regulations around cannabis use from country to country can cause confusion for travellers who suddenly find themselves getting fined for carrying marijuana.

Below is a list of European countries and their current rules and regulations around the use of cannabis. Being aware of the varying cannabis restrictions can save you a lot of money and hassle the next time you decide to travel.

Overall, the Czech Republic has a very lenient cannabis policy. Use and possession of cannabis have been decriminalised, medical marijuana is legal, and cannabis plants can be grown for personal or private use. The law states quantities for personal use are up to 15 grams of herbal cannabis, 5 grams of hash, and up to five marijuana plants.

Possession of small amounts of cannabis is generally considered a misdemeanour but not publishable by law, although you’ll likely get a fine. If you possess a large amount of marijuana, it could lead to a year or more in prison.

The Netherlands has the most relaxed stance on cannabis use but it’s still illegal, for the time being. That being said, while marijuana use isn’t legal, it has been decriminalised, and the country has a toleration policy around soft drugs such as marijuana.

In fact, the country is so tolerant that coffeeshops actually sell weed in small amounts to their customers. This doesn’t mean you can buy however much marijuana you want at a coffeeshop, though. The shops have to follow strict rules if they want to sell marijuana, and the government is very careful about regulating who can buy from the coffeeshops. A few of the regulations include:

In an effort to cut down on cannabis tourism, the government also restricted sales to residents of the Netherlands.

Overall, the Netherlands is very tolerant of cannabis as long as its in small quantities (no more than 5 grams). Even if you’re in possession of this much marijuana, you will not be prosecuted for it.

Like the Netherlands, Portugal has also decriminalised the use of cannabis. In 2018, the country even legalised the use of medical marijuana. It’s only meant to be prescribed once all other forms of conventional treatment fail. It’s often prescribed to treat ailments such as chronic pain, cancer therapy, post-traumatic stress disorder, and others.

While Portugal may be lenient with the medical use of the drug and have it decriminalised otherwise, it is still illegal to sell and cultivate cannabis. Offenders of this law can be given anywhere from a one to a five-year prison sentence.

Cannabis use in Spain is a bit more complicated than the Netherlands and Portugal. Weed has been decriminalised, but public use is still considered a serious offense and could result in a very hefty fine. Private use, however, is another matter entirely. For the most part, private use and even the cultivation of marijuana are considered legal. As long as you’re in the privacy of your own home, you can smoke and grow cannabis for your personal use.

Cannabis clubs are another way people get around marijuana restrictions in the country. If you belong to a cannabis club, you pay a membership fee and then the club can grow and distribute marijuana to you, as a member.

Switzerland is another country with complicated cannabis laws. Legal strains of cannabis in Switzerland must contain less than 1.0 percent of THC. If you’re caught with marijuana, you’ll likely be charged a fine of around 100 Swiss Francs but it’s unlikely you’ll face prosecution if you possess less than 10 grams.

Since 2011, doctors have been allowed to prescribe medical marijuana to patients. This cannabis prescription can have a THC content of more than 1.0 percent.

Ironically, France has some of the strictest marijuana laws in Europe, and yet it’s still one of the biggest cannabis consumers. It is illegal to possess or consume cannabis whether or personal use or not. If you’re caught with marijuana on your person, the severity of your punishment is based on the amount of cannabis you have. Depending on the circumstances, you may get lucky and be released without punishment. In other cases, you may have to take a drug awareness course, at your own expense, or serve up to a year in prison.

Medical marijuana is not yet legal, although in 2014 France did authorise the use of Sativex as a prescription. Sativex is derived from cannabis, but although it was authorized in 2014, it has been inaccessible to patients and doctors due to a lack of agreement on price.

Based on the above, it’s clear marijuana laws in Europe can be quite confusing. Cannabis use is still largely illegal even though many countries have legalised medical marijuana.

If you’re going to smoke, make sure you’re either in a private location or in an authorized coffeeshop or cannabis club to reduce your risk of getting fined. It can also be helpful to have your own pre-rolled cones on hand so you don’t have to worry about finding papers while you’re out. If you’re not an expert joint roller, these handy pre-rolled cones also make it easier to enjoy yourself when you find a promising coffeeshop to stop in. Just remember, check the laws before lighting up so you know where it’s safe to partake and what areas should potentially be avoided.