The Top Ten Cannabis Related Movies (And Those You Should Watch While High!) 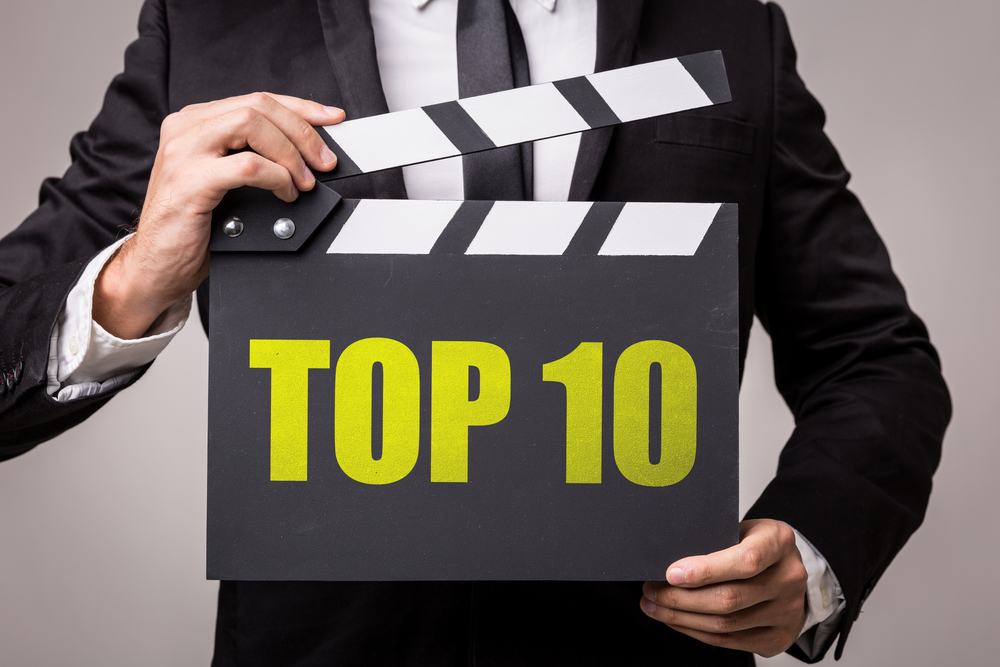 There can be no denying that cannabis and the big screen go hand-in-hand. There are literally hundreds, if not thousands, of movies and TV shows themed around marijuana, from the downright absurd to those that are a little more thought provoking.

Of course, while the directors and screenwriters have used smoking as a way to generate a storyline, many of us also like to relax with a joint and watch some films. That is why in this blog, we thought we would take a look at not only our top ten cannabis-related movies but also our favorites to watch while enjoying a smoke.

Before looking at some of our favourite movies to watch while enjoying cannabis, we have compiled our top ten films that feature weed…

Probably one of the very first films to be heavily based around stoner culture, Up In Smoke is one of the best cannabis-related films on the market. The plot begins when Anthony “Man” Stoner, an unemployed cannabis-smoking drummer, is given an ultimatum by his parents to either get a job or join a military school.

The film sees him partner with another marijuana smoker while hitchhiking, which leads to hilarity as they work their way through an array of drugs. Featuring famous actors Cheech and Chong, it is one of the most famous stoner movies of all time.

Another very popular movie about cannabis, this Harold and Kumar film sees the two title characters head out on a quest to secure a burger and some bud through New Jersey. The stoner comedy sees characters undertake an array of self-discoveries and features a host of famous actors, Christopher Meloni, Fred Willard, Neil Patrick Harris, Ryan Reynolds, and Anthony Anderson.

The cult movie might not have been an immediate commercial success, but it has become one of the most stoner movies of all time.

Another famous stoner movie, The Big Lebowski follows Jeff Bridges as ‘The Dude’, a character who is wrapped up in a mistaken identity. From bowling and cannabis to the iconic white Russian drink, the film is the ultimate stoner story of success.

Released in 1998, the movie has become a cult classic and is loosely inspired by the works of renowned screenwriter and journalist Raymond Chandler. Despite being over two decades old, the “Dude” is still one of the most popular fancy dress outfits.

Featuring an all-star class, Pineapple Express is one of the most popular modern stoner movies. The movie sees a part-time marijuana dealer getting caught up with a powerful strain of weed developed by the government.

The comedy movie was an instant success and grossed $102 million worldwide since its release, making it one of the most successful stoner films of all time.

Another cult classic, Dazed and Confused features an incredible cast that includes the likes of Matthew McConaughey, Renee Zellweger, and Adam Goldberg. Released in 1993, the movie is a coming of age comedy that follows a range of different groups of teenagers on their last day of school.

Ranked in Entertainment Weekly’s top 50 High School films of all time, the movie has become an iconic film for stoners and movie buffs alike.

Featuring Fairuza Balk, Jeremy Strong, and Frances Conroy, Humboldt County is one of the most famous cannabis related films of all time. The drama/comedy has entertained thousands of fans across the globe.

Launched in 2008, the film covers everything from marijuana farming to family relationships and is a popular trip down memory lane.

This 1998 stoner comedy has become a genuine cult classic and features Dave Chappelle in one of his first feature films. Although it might not have received the critical success that it deserves, Half Baked is one of the most popular stoner movies of all time and features cameos from the likes of Snoop Dogg, Willie Nelson, and Tommy Chong.

Since its release in the 90s, the movie has gone on to be launched on several DVD runs and is now one of the most watched stoner movies.

Released in 1994, The Wackness tells the tale of a pot dealer who begins selling marijuana in order to support his family. Trading his weed for therapy from a psychiatrist, the movie explores the importance of relationships and friendships.

Jonathan Levine, the writer and director of The Wackness, says he was inspired by the iconic film Fast Times, alongside his own experiences of graduating high school and coming of age.

Since its release, the film has achieved cult status and is considered one of the most seminal pop culture films of the 2000s. The film grossed $73.2 million in total, far surpassing its $13 million budget.

Proving that not all cannabis related films need to be a comedy, Saving Grace is a melodrama that can entertain the whole family. After the lead character’s husband commits suicide, she turns to farming cannabis in order to support herself. Staring Craig Ferguson and Brenda Blethyn, the film has become an incredibly popular and thought-provoking movie.

Released in 2000, the film grossed over $26 million worldwide and received several awards from the likes of the Norwegian International Film Festival, Munich Film Festival, and the BAFTAs.

The best movies to watch while enjoying cannabis

Now we’ve looked at some of the best cannabis related movies, we thought we would not take a closer look at those movies that are perfect for watching while enjoying a joint.

One of the most popular films of all time to watch while high, 2001: A Space Odyssey was released in 1968 and has become an epic of the science fiction film series. Directed by the legendary Stanley Kubrick, the film is an epic adventure of time travel and lunar exploration.

If you are looking to enjoy the movie, then many people recommend going to the theatre to watch it while very high to ensure you can enjoy the very best experience possible.

This cult classic of the 1990s is a must-watch while high, and is sure to see you belly laughing at the plotline. Featuring an incredible cast that includes the likes of Ice Cube, Chris Tucker, and John Witherspoon, this classic film is one of the most quotable movies of all time.

The stoner comedy was a huge success and spawned a host of sequels, including Next Friday and Friday After Next, seeing it become a true cult classic for the stoner crowd.

Considered one of Adam Sandler’s best movies, Billy Madison is a hilarious comedy that is perfect for watch while high. Playing a 27-year-old rich kid who needs to retake his elementary education, Adam Sandler is the ideal lead role in this 90s film.

Despite receiving mixed reviews from film critics, the movie has gone on to become somewhat of a cult classic and is still enjoyed today.

Created by Seth MacFarlane, the writer of Family Guy, Ted is one of the most popular comedies of recent years. The ultimate stoner movie, the film features Mark Wahlberg and a talking teddy bear who provide slapstick comedy throughout.

The film went on to gross an incredible $549 million, making it the fifth highest-grossing R-rated comedy of all time. It also saw a popular sequel released, ensuring you can sit back and enjoy an evening of comedy.

5. Jay and Silent Bob Strike Back

When it comes to hilarious films to watch while enjoying a joint, then Jay and Silent Bob Strike Back is one of the all-time greats. This 2001 stoner comedy is part of a wider collection of satirical movies, and features a host of cameos, including the likes of Ben Affleck and Jason Lee.

Although the critics were mixed in their reviews, the cult film has become a classic and has grossed nearly $34 million over the years.

What better way to enjoy your smoke than kicking back and watching the all-star cast of This Is The End. Depicting the end of the world, the story follows a host of stoned stars trying to navigate the last party on earth.

If the likes of James Franco, Seth Rogan, and Jonah Hill isn’t enough, then This Is The End also has a host of famous cameos, including Emma Watson, Rihanna, and Kevin Hart!

There can be no denying that Super Troopers is one of the best films to watch while enjoying your cannabis. This hilarious comedy follows some of the world’s most slacker highway patrolmen as they try to track down cartoon monkey drug dealers.

Released in 2001, the instantly quotable film has gone on to become a genuine cult classic and is still watched around the world to this day.

8. Fear and Loathing in Las Vegas

Hunter S Thompson’s epic film is the perfect movie to kick back and relax to. The epic adventure of drug-induced insanity is absolute mind-bending perfection for when you’re stoned, and is guaranteed to have you gripped from start to finish.

Released in 1998, the film features Johnny Depp and Benicio del Toro as they journey through the wonderland that is Las Vegas.

Released in 2001, Wet Hot American Summer takes place on the last full day at a fictional summer camp in 1981. The hilarious comedy has developed a huge cult following and has even spawned a short mini series on Netflix.

Staring a host of famous names, including David Hyde Pierce, Molly Shannon, and Paul Rudd, the film is a guaranteed laugh when you’re enjoying your cannabis.

This 1995 buddy comedy follows two dorky comic book loving best friends who are dumped by their girlfriends on the same day and head to their local mall to seek solace. With a host of famous faces appearing, including Jay and Silent Bob, the film has become a cult classic and has been re-released several times over the years to an ever-growing audience.

Looking to enjoy your joint?

No matter whether you are looking for a cannabis-related film or you just want to kick back and enjoy your smoke, these are some of our favourite films. Of course, whatever you are watching, you want to ensure that you are able to enjoy the very best joints possible.

Here at Eurocones, we pride ourselves on offering the very best pre rolled cones for our customers. Our young and innovative company is passionate about putting smiles on faces and bringing friends together. We deliver the very highest quality pre-rolled cones and smoking accessories for 420 enthusiasts, striving to ensure that every product is as good as it can be.

All of our cones are 100% vegan and beautifully handmade, specifically designed to help you elevate your smoking experience and enjoy the best smoke possible. We’re fuelled by creativity, innovation, and individuality, which is why we also offer an array of cutting-edge solutions for smoking professionals. For example, our Knockbox 100 Filling Device is designed to help you save countless hours by filling up to 100 cones in a matter of minutes.

Want to find out more about our range and how Eurocones can help you? Get in touch with our friendly team today!